Slow cooker potato soup is one of the easiest yet most hearty and delicious soups that you can make in your crockpot. Russet potatoes simmer in a bacon-flavored broth all day long, then you simply thicken it once you are ready to serve and eat!

If you are looking for more slow cooker soups you can also try our ham bone split pea soup or slow cooker hamburger soup.

Potato Soup in the Slow Cooker

This recipe is so simple, yet so full of flavor that it will soon become a regular in your soup rotation! The hardest part of making it is frying the bacon and onions for it, and the peeling of the potatoes.

If you want, you can cook the bacon and onions the day before, and get everything ready IN the slow cooker, refrigerate it then start it cooking the next day! It is a great way to save time the day you want the soup.

To make it all you do is:

This is a very hardy soup that is a meal in a bowl thanks to all of the potatoes in it. We like to use potatoes to make a thick soup rather than a ton of cream or milk at the end, it yields a better soup.

But don't worry there is still milk and cheese at the end!

Do I Need an Immersion Blender?

No, you don't! The potatoes in the soup are cooked so well that we use a potato masher in the soup at the end before adding the roux to break them apart! Simply take the masher and press down into the soup and press the potatoes against the bottom of the slow cooker. Repeat until you have broken down most of the potatoes yet still have smaller chunks for texture.

After this proceed to the roux.

We prefer to use Velveeta cheese instead of shredded in this soup as it takes the creaminess over the top! However, not everyone enjoys Velveeta (though we think it's great in moderation) so you can use your favorite cheese shredded for the cheese flavor.

Hope you enjoy it!

The Fast and Slow Team

Creamy slow cooker potato soup cooks all day and is loaded with cheesy bacon flavor, the perfect lunch or dinner!
5 from 1 vote 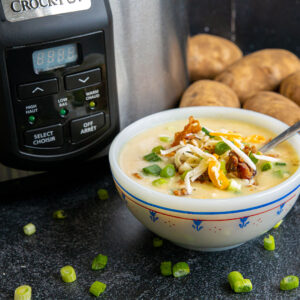 All calories and info are based on a third party calculator and are only an estimate. Actual nutritional info will vary with brands used, your measuring methods, portion sizes and more.

Please rate this recipe in the comments below to help out your fellow cooks!

We love using our appliances to make simple & easy home cooked meals that are perfect for busy families. Nothing beats a delicious hot meal at the end of the day with your loved ones - and we're here to help you with that!

Share this ArticleLike this article? Email it to a friend!
Email sent!